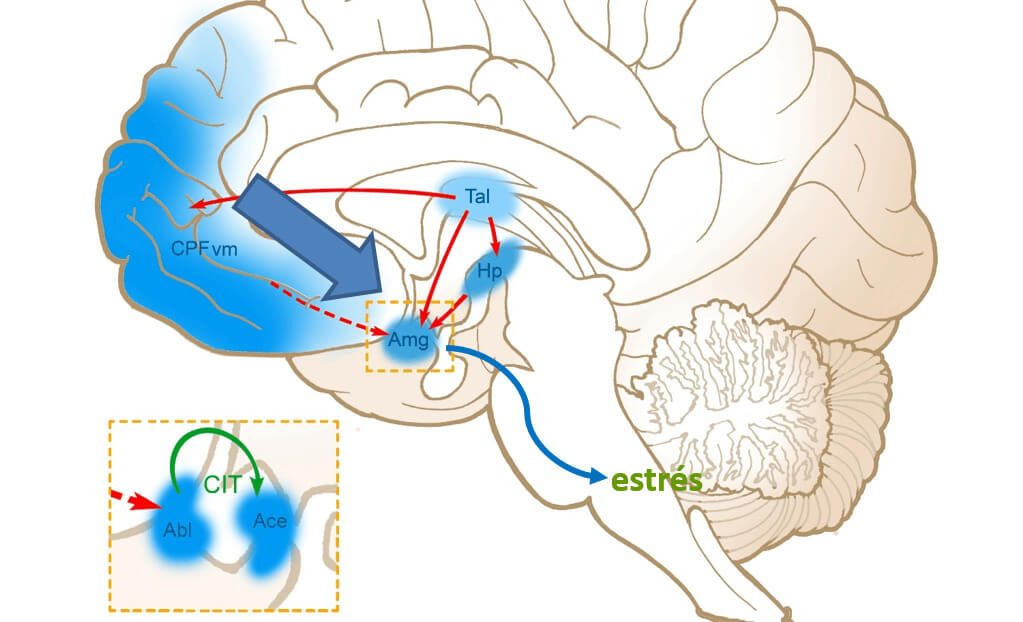 How the brain centers of caution or prudence, fear and stress interact

At the end of the previous article, in order to detect the brain centers involved together with the PFC (prefrontal cortex) in prudent neurobehavior, we asked ourselves:

What do you think is the unconscious purpose of prudent behaviors (anticipating, planning, learning, avoiding mistakes) in the brain?

Let’s answer it directly. The purpose is to be prepared to face the uncertainty of future situations. Simply!.

In this way, when we face a situation for which we feel prepared, the prefrontal cortex sends a message to the amygdala (the most important of the brain’s fear and threat centers) telling it, more or less: ‘there is no problem, you don’t need to activate’. In response, the amygdala calms down and then does not turn on the stress system. There is no need to attack, flee, or stand still, since the brain does not perceive the situation as a threat.

Yes. The limbic brain centers (lower in the brain) involved are fear and stress. The amygdala is stopped by intercalated cells that communicate at synapses with the neurotransmitter GABA. It has the same effect as if we were to take a Valium, a benzodiazepine, a tranquilizer.

Excessive prudence leads us to worry and we connect with stress.

So far so good. However, the future is highly uncertain. By wanting to control it to a great extent, it is easy for us to fall into worry. Then we begin to imagine the future in its most negative aspects. From NeuroQuotient® we usually summarize it as: ‘imagining lions where there probably never will be’. We provoke, only mentally, a state of alert almost permanent, with the system of fear and stress activated.

In addition, since there is no need to run away (because the lion is not tangible) not only the fast pathway of stress is activated, but also the slow pathway (that of cortisol), and stress becomes chronic.

So, the neurobehaviors of prudence, which give us important advantages, when we take them to an extreme, we can turn them against us.

This is one of the differentials of NeuroQuotient®: helping to become aware that, frequently, taking strenghts (we call them efficiencies in the model) to an extreme  we can self-generate limitations.

Actually, it is enough being prepared for when a real lion appears. Provide resources only for major difficulties with a certain high probability. Do not turn small future details into a source of fear and stress, continouslly imagining lions.

With less stress we can be more daring.

Sometimes, when asking one of our coaching clients how they would like to feel, they answer: ‘safe’ and, he adds, ‘calm’. This is the security of those who want to feel protected, free from threats, within their comfort zone.

However, true security is related to self-confidence. The one of pro-activity and courage. The one of daring. That of feeling capable of venturing into the unforeseen outside the comfort zone. Channeling energy, positive stress, towards action and the achievement of tangible and valuable results. Not wasting it with chronic stress (distress). Taking care of what is worth, not worrying about trifles.

In the next article we will finally begin to address a tool. Specifically DISC. But to close, we want to summarize what we have seen in the last two articles and what differentiates the NeuroQuotient® model from other coaching models and tools for personal leadership development.

Finally, it is important to note that the Stress+Prudence example is not literally a dimension of NeuroQuotient®. But it does help us understand that: de NeuroQuotient®. Pero sí que nos ayuda a entender que:

We are not facing a polar model. The ‘pairs’ of traits in NeuroQuotient® are not dichotomies in themselves, since we can be on one side of the other at the same time.

In each ‘pair’ we have one side that gives us efficiencies, while the other limits us. The limitations arise from the effectiveness itself. Being aware of this, we stop insisting on wanting to improve by doing more of the same.

Behind each behavior-habit (neurobehavior) there are brain centers and currents that are more involved. By understanding how they work, we can consider more effective strategies to improve our satisfaction.

Hebb’s rule with an analogy. Psychology and neuroscience