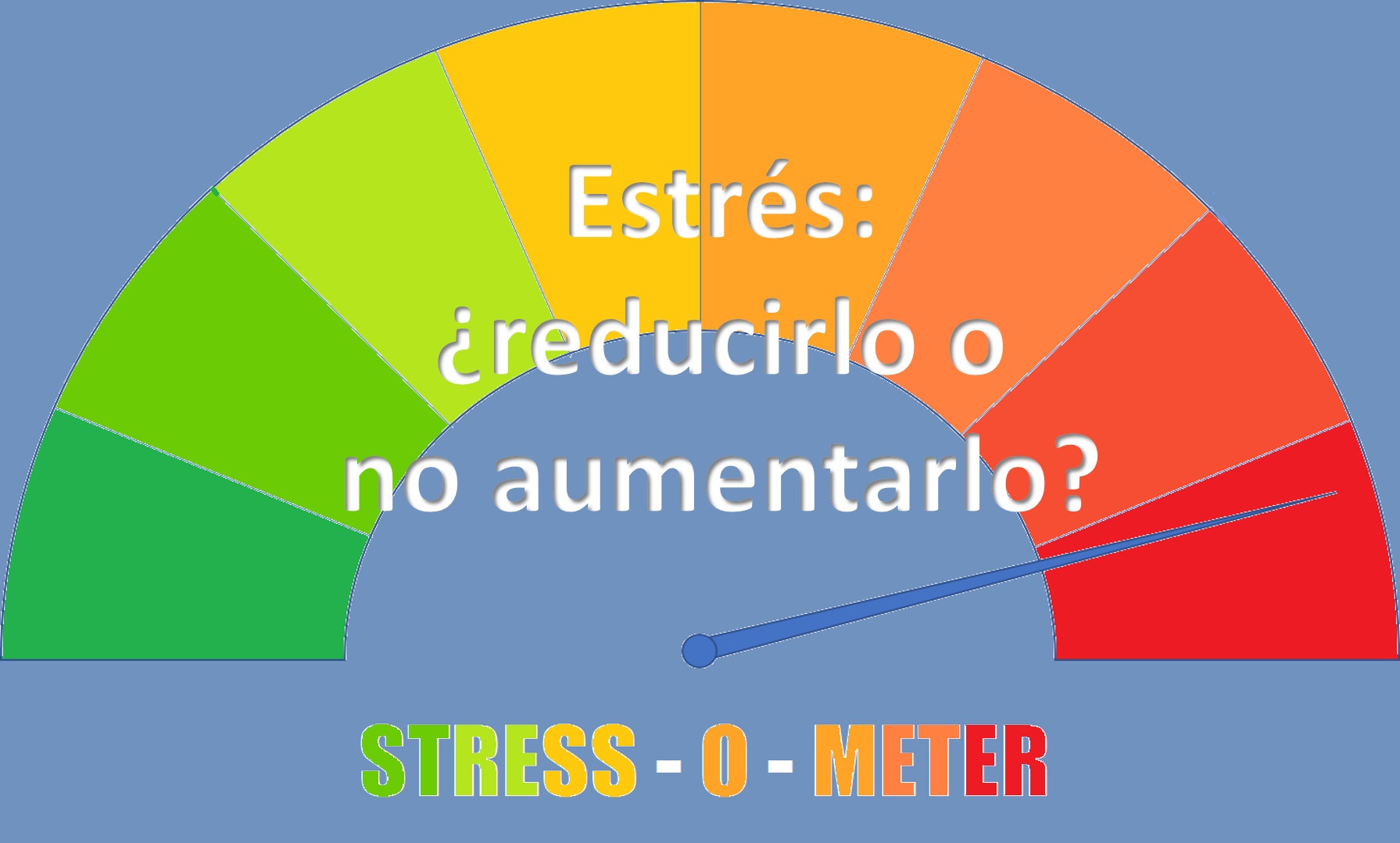 In this article we inquire ourselves about which option is better: reducing stress or not increasing it. Stress, or rather distress (when it is very high and persistent) is an evil of our time. Understanding its neurological fundations we will see that many times we exaggeratedly increase it with our own perception and interpretation of situations. Understanding the neuroscience of behavior we become aware that sometimes we are limiting ourselves. The NeuroQuotient® helps us to do it.

Frequently, we want to lower our stress

A few days ago, when preparing a coaching session, we saw that a person asked us to discuss about more techniques and exercises to reduce stress.

He said something like this: ‘I practice sports and meditation, but I’m not able to reduce my stress to an acceptable level. Quite the opposite, I think it is increasing ‘.

It’s clear that we are talking about ‘distress’, excessive stress, almost chronic stress. The one that manifests itself in a series of unpleasant bodily sensations and in difficulty to concentrate and rest. Either it is hard for us to sleep or we fall exhausted and after two or three hours we are with our eyes wide open.

Often the main source of stress are our-selfs

How do we cause or cause stress to increase?

Shortly after starting the session we asked to the person who wanted to reduce the stress: How do you do it to increase your stress?

We can measure the sensation of stress on a scale of 1 to 10. We consider 1 to 5 adequate, above 5 to 7 worrying and 8 to 10 serious. The 0 does not make sense, it is not a reasonable level, the day we achieve it we will not be at all.

Someone in a constant sense of stress of 8 or 9, doing regular coping exercises, it seems clear that they have an internal source of stress.

It is logical that in a fire, in an earthquake, in a terrorist attack, in the face of a loss, etc. we feel stressed. But the person of the example, neither the present, nor in the past, had any similar situation.

There was not present, what we used to call, a relevant external stressors. It just happened, as in many cases, that the main source of stress was internal. An external trigger could exist, but the own perception was very much important.

What are the neurological bases of stress?

The brain system of threat or fear

To understand it better, let’s see what happens in the brain, and in the body, with stress.

Stress is born in the system of fear or threat. With animals we prefer to talk about threat and in humans of fear. Fear is an emotion, the result of the interpretation of the situations and the corresponding sensations.

Let’s start with the animals and quite the same will be valid for the human animal.

What is the purpose of the threat system?

Simply, the species survival based on minimizing damage and pain.

When the animal perceives with its senses a signal that, its species memory, indicates that it is a threat, it can respond in different ways: Fighting, if it can cope with it or flighting, if the threat is greater than its possibilities.

We leave aside a third option here: standing still, freezing, which we have already seen earlier, more associated with depression in humans.

At the center of the threat system are the amygdalae. The sensory signal reaches the basolateral zone of the amygdala and, from there, goes to the central zone that connects with the autonomic nervous system, activating the sympathetic branch and braking the parasympathetic branch.

The animal is ready to attack or flee! So much goes for both. Depends on what the memory indicates, the amygdalae are the same and what comes next, too.

The fast and slow pathways of stress. The autonomic nervous system and cortisol

The sympathetic branch of the autonomic nervous system secretes adrenaline (epinephrine) in the core of the adrenal glands. The adrenaline passes into the blood, increasing the heart rate, increasing blood pressure, dilatating the pupils, opening the bronchi, etc. This is the fast, immediate path of stress. The one that facilitates fighting or the flighting.

After about 10 minutes, the slow path of stress begins to work. That of glucocorticoids (cortisol in humans). Cortisol is secreted in the cortex of the adrenal glands. Mainly it serves to generate energy from the reserves of the body (fats and proteins)

The slow way replaces the lack of activity of the parasympathetic branch, whose function is to favor the recovery of energy with rest and digestion: lowering the heart rate, contracting the bronchi, closing the pupils, promoting salivation, etc.

We usually talk about sympathetic activation and we forget parasympathetic deactivation. But symptoms like dry mouth, difficulty breathing, digestive problems, eyes open at night, etc., are very frequent, right? These symptoms lead us to think that we need to lower our stress.

On the other hand, the slow pathway has few opportunities for activity in animals. At 10 minutes the gazelle or has fled the lion, or very bad for the gazelle. If only it were wounded and hidden, then corticosteroids would go into action to facilitate its recovery.

It is important to point out that between the basolateral and the central amygdala there are neurons interspersed with the neurotransmitter GABA that can stop the activation of the central amygdala. In the next article we will discuss methods of coping with stress “Stress management. Learn not to increase stress from neuroscience “, we will talk deeply about it.

And in the most human part? How do we influence the fear system?

What has been seen so far is valid for humans also. We have already introduced it when talking about the parasympathetic autonomic nervous system.

The difference is in the higher prevalence of the prefrontal cortex (PFC). With which we think and direct attention. The one that differentiates us in more or less extention from the other mammals.

Thanks to the PFC, humans do not distinguish between what we perceive, what we imagine or remember. That is, the signals that reach the amygdala often have internal origin or, at least, are interpreted by the PFC.

With high worry, self-demand and perfectionism (when all details are very important), with the interpretation of situations, we can focus on exaggerated dangers, which are only in our mind. We self-generate fear and start the ‘flighting’ side of the threat system. On the other hand, wanting to achieve very high and short-term results, we see obstacles in the way and put ourselves in a position of ‘fighting’ towards others.

Then, with attention and thought we may activate the central amygdala and the sympathetic nervous system and brake the parasympathetic one.

Also, when we put ourselves in ‘flighting’ mode we do not run away. Why run? There is no a lion by there.

When stress is persistent, long-lasting, anxiety appears. With the fast and slow pathways (cortisol) permanently working.

By putting ourselves in a fighting position, we do release energy. This is why sport works to reduce stress.

Some humans with great tendency to ‘fight’, do not accumulate stress because they expel all of it. Great for them and worse for the people nearby.

But it is not usual. After all, the fight and flight brain pathways are the same.

What is our specific case? Do we need to reduce stress because we tend to increase it ourselves?

We imagine that now there is little doubt as to how stress is generated and that, in many cases, the main source may be internal. And that, in general, for good management rather than thinking about reducing stress, it is more efficient to try not to increase it.

It is important to emphasize that not all brains and human bodies are equally sensitive to stress. Consequently, not everyone has the same need to manage it, because we do not feel it with the same intensity. Some people are more resilient and are less affected by external stressors.

In those who do feel stress intensely, often an important error happens: We try to manage it with thought, with the PFC. And, then, being so aware of the body sensations and by worrying, the result is the opposite to the desired one.

Well, considering the neurological basis of stress, in the next article we will look for ideas to manage it. To not increase stress or to reduce stress.

But, always the first step is awareness. With NeuroQuotient it is easy to detect the greater or lesser level of stress, the greater or lesser resilience, the tendency to fight or to flight and find ways, new neuro behaviors, to manage stress. It is about developing self-leadership, taking advantadge of neuroscience.

Happiness and neuroscience. Flow, being in the Zone.