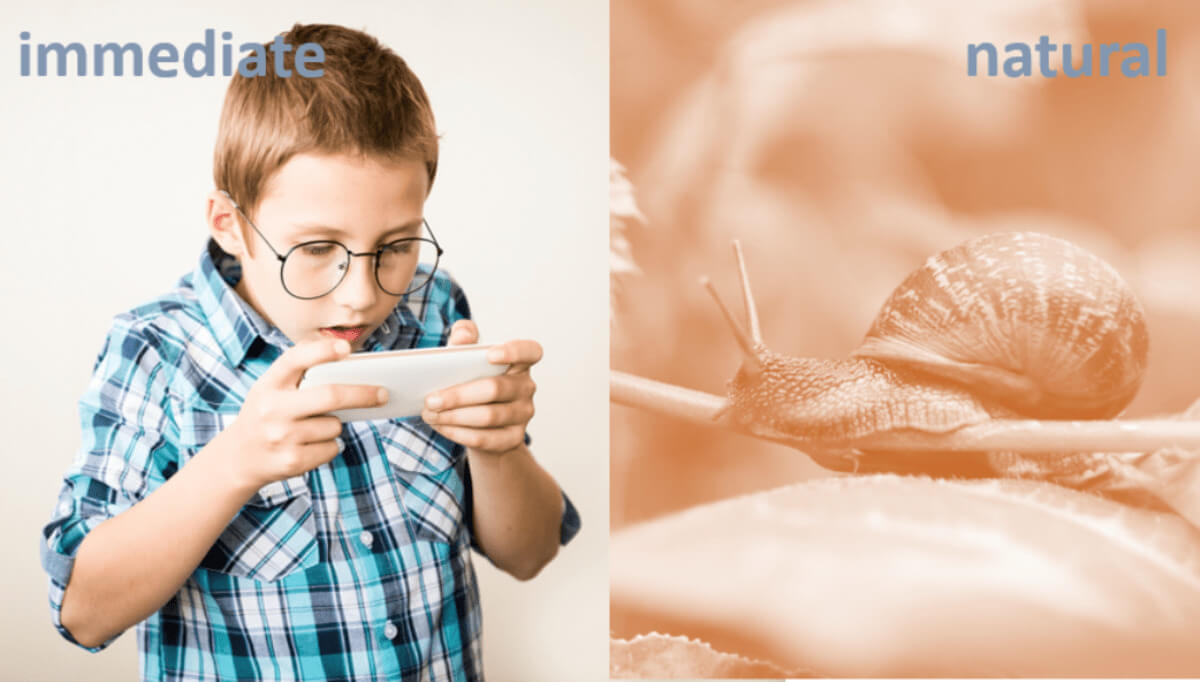 One of the purposes of NeuroQuotient® is to make neuroscience understandable and practical. In this way, it helps us to explain many everyday issues concerning the development of people.

We generally address with the development of adults in work contexts. However, we are very aware that the key is in children. In neuro education. The sooner we understand what it works, and not, at the level of brain development, the sooner it will be possible to address it in an empowering way.

Some of our posts are based on an external article that gives us a theme that inspires us. From it we treat the connection with neuroscience.

In this case the spark is in an article byJosé María Sánchez published inINED21. He talks about a concept, new to us, called Nature Deficit Disorder (Trastorno por Déficit de Naturaleza.) that the first person to talk about it was Richard Louv in his book “Last Child in the Woods”

Just a couple of sentences taken from the article itself to contextualize and quickly understand what the Nature Deficit refers to.

With all this we arrive to the central theme of our entry: impulsivity in education.

Nature Deficit and Impulsivity in Education.

The article referring to ‘nature deficit’ has suggested us to address the issue of impulsivity in education for three main reasons:

Two: there are more and more cases, or pseudo cases, of Attention Deficit Disorder (ADHD), of which impulsivity is a central symptom.

And Three: contact with Nature has to be very useful to address impulsivity in education.

Let’s see it point to point.

The immediacy that derives from the abuse of technologies (‘being in front of a screen’) as a possible impulsivity enhancer.

The problem of impulsivity in education is increasingly relevant, right? Children who find it difficult to manage their impulses (not only the physical impulses). They interrupt constantly. What they act thoughtlessly, without thinking about the consequences of what they say or do. Etc.

From our point of view, a probable cause is in what fills the Nature Deficit. That is, in technology. Understood as being permanently tied to a screen with a mobile, tablet and / or computer (social networks, games, …). Technology is not bad at all. The problem is seen in the excess of technology and in its main characteristic, immediacy.

With the abuse of ‘technology’, neuro behaviors (brain connections that are behind the behavior) in which immediacy is a fundamental characteristic are generated or reinforced. This immediacy translates into impulsivity and slows the development and use of prefrontal functions. In at least two ways:

1. Hindering the ability to postpone the reward and to generate habits of perseverance and persistence. Neuro behaviors of patience do not develop. Only the immediate reward is worth.

The brain reward system, which is the approach motivation does not develop properly. If impulsiveness in education is not treated properly, we generate adults who are not able to defer the reward. They have no patience to go beyond an immediate or almost immediate reward.

2. Impairing to learning from mistakes. Neuro behaviors of prudence and prevention do not develop. With the immediacy, past, present and future are confused in the brain. So how can they learn from experiences if the prefrontal brain does not have enough time to assimilate them?

Experiences with computer games allow correcting immediately (trial, error), with impulsivity. It does not work, then I take another path. This is great for learning to deal with unforeseen events, and to take advantage of the speed of the limbic brain. But it is not appropriate for structuring thinking and consolidate deeper learning connecting with past / present / future causality.

Attention deficit disorder (ADHD) is becoming more frequent. One of its symptoms is impulsiveness towards the search for immediate rewards.

It is also clear that there are more and more cases or pseudo cases of attention deficit disorder (ADHD) in school. Are we not promoting it in some way?

When talking about ADHD we want to cover both the one that includes physical hyperactivity (H) and the one that doesn’t. The second is less visible, but all symptoms occur (difficulty concentrating, lack of motivation, impulsiveness in decision making, difficulty in organizational habits, etc.). The first case is easier to detect: The child can’t keep still. And, paradoxically, so what we do, in order they not make us dizzy, we give them a tablet (technology) to play and leave us alone. Oh!

We have introduced above the brain reward system. Which, in animals (in humans too) favors survival by promoting behaviors that are rewarded with pleasure. The central neurotransmitter of this system is dopamine. It is important to say that dopamine does not produce pleasure. Dopamine participates in the motivation of behaviors that are likely to have a pleasant reward. It also helps to create habits and concentration and to avoid the dispersion of thought.

But how can we deal better with ADHD and impulsivity in education?

The contact with nature and getting along with its rhythms helps to treat impulsivity in education.

In NeuroQuotient we have very much in mind the principle of Donald O. Hebb. ‘‘Neurons that are activated together reinforce their connection’ (fire together, wire together). That is, we have brain connections (neuro behaviors) that when we use them we conduct ourselves in a certain way and, at the same time, these connections are reinforced.

And if we don’t use them, they weaken!

Children with too ‘technology’ are reinforcing their neuro behaviors of immediacy and impulsivity. Meanwhile those that connect with nature and its slower rhythms are forgotten, due to lack of use. With the immediacy, impatience and impulsiveness the present is short and instantaneous. It’s hard to live life this way!

The supply of Nature’s Deficit with Nature is a good approach to better manage the impulsiveness in education.
Memory has led me to remember the fantastic snails races that we rode in grandparents’ house.

For instance, organizing a snail race can generate enough dopamine to feel motivation to carry it out. By witnessing the race we can keep enough dopamine to concentrate and guide the snail on its way (why do they always deviate?). And the most important is that we exercise the reward system and strengthen dopamine at a pace consistent with nature.

Results of filling the Nature Deficit with Nature.

Finally, say what we would like to have the opportunity to perform the Marshmalow test.

with children following education with and without Nature Deficit.

The Marshmalow test, is that study in which children were given a ‘sweet’ and told them what if they waited to eat it for a certain time, I would give them another. A way to measure the ability to persist and defer the reward and manage impulsivity. Which would be the result?

Likely, by dealing better with impulsivity in education, children are more able to defer reward, pay attention to non-immediate results and not get carried away by impulses.