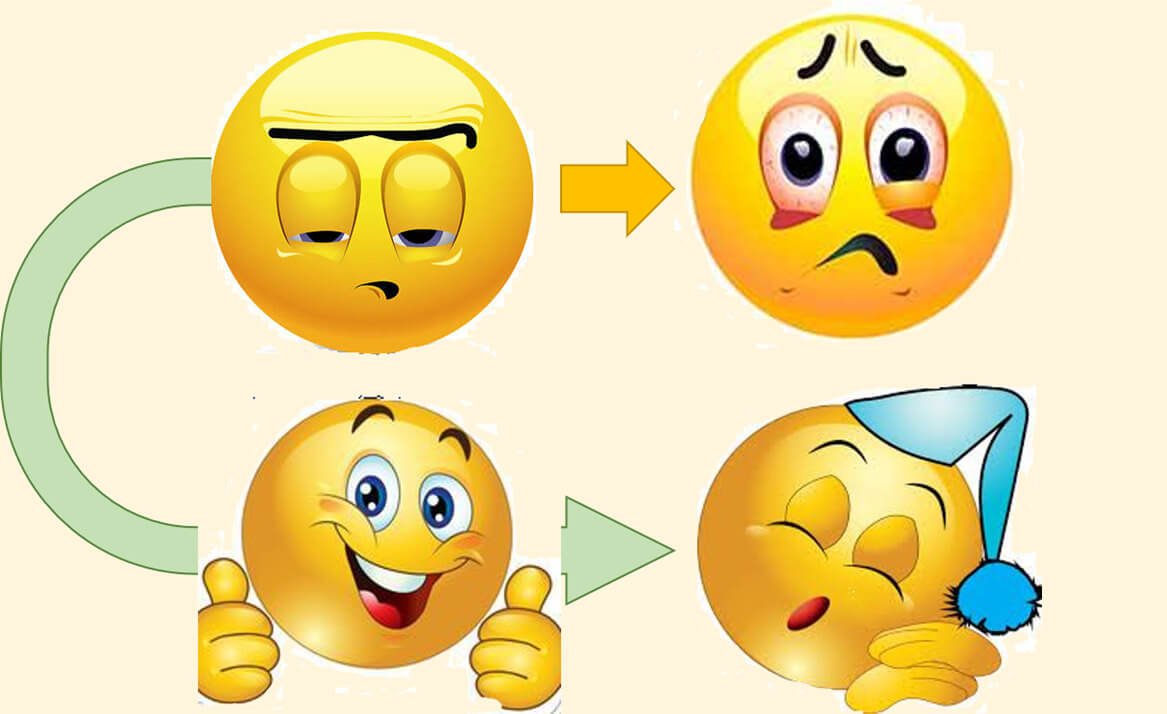 We inquire about the relationship between insomnia and optimism (or lack thereof). Two investigations help us to consider whether insomnia (poor sleep) negatively influences optimism or rather pessimism causes insomnia. We take the opportunity to investigate the relationship between disorder and symptom (neuro behavior in NeuroQuotient®). We conclude that a positive, optimistic approach to the future helps you sleep better. And, above all, avoid the negative approach with which we create stress and anxiety. The Life Orientation Test-R items are a good guide for an optimistic approach.

At the beginning of this summer (2020) two reviews appeared in NeuroScience News that caught our attention.

Both suggest that there is a relationship between optimism and quality of sleep (insomnia, when this quality is poor).

Does little sleep (insomnia) lead us to be less optimistic (pessimistic)? Or, with less optimism (more pessimism) we sleep worse (more insomnia)?

To see which sense most influences the relationship insomnia and pessimism, let’s go a little further. We will ask ourselves another question that we often ask ourselves in NeuroQuotient®.

Is a symptom the result of a psychological disorder or is the disorder derived from the symptom?

For example: We know that rumination (getting stuck thinking in a negative way about oneself) is a symptom of depression. There is a clear correlation between depression and rumination. But, what has a higher weight?

Is rumination derived from depression or does the tendency to ruminate lead to depression?

Posing it as the disorder / symptom dichotomy will help us. Let us remember that in the context of NeuroQuotient® a symptom is a ‘neuro behavior’. A neuro behavior is a brain pattern, a neural path, that leads us to conduct ourselves (think, feel, do) in a similar way in certain situations (look at Hebb’s principle).

Let’s look at the articles independently first and at the end we will return to these initial questions.

The study consisted of the following:

They tested and compared the participants in the two parts of the study for:

To do that, The Conners’ Continuous Performance Test (CCPT) was used.

In this test, during 14 min 360 images are presented in a pseudo-random way. Letters from A to Z appear on them. Participants must press a button every time a letter appears except for the letter X.

The PANAS SCALE (The Positive and Negative Affect Schedule) was used.

This scale has 20 items. 10 scale items correspond to positive affect and 10 items to negative affect. Are the following:

The results in terms of Responsiveness and accuracy were:

The authors wonder, do we react faster to compensate for the lower concentration?

It probably is. At NeuroQuotient®, we believe that, even with less sleep, we can be alert to act, but with partially impaired cognitive prefrontal functions. Probably with the PFC (prefrontal cortex) not completely on.

Concerning the positive and negative affect:

They did not find clear differences regarding negative affect. But they do in the case of positive ones. Positive emotions scored worse after a night of reduced sleep and even worse after three nights. They felt less enthusiasm, attention, and fulfillment.

That is, for what interests us the most. Yes, there is a negative effect of less sleep on optimism. Taking it to our field, we can say that insomnia increases the tendency to pessimism, although not in a very relevant way.

Anyway, let’s not forget that the study is aimed at young people. It shows that a good quality of sleep is necessary to obtain good academic, work and health results. Going to bed late and sleeping little on a regular basis can also lead to a change in the circadian cycle.

On the one hand, they measured the insomnia of the participants taking into account two definitions:

Insomnia (exact definiton): difficulty initiating sleep and/or waking up earlier than desired. Sleep disturbance and associated daytim sumptoms occur at least three times per week, and have been present for at least three monts.

On the other hand they measured the optimism using The Life Orientation Test – R.  (LOT-R).

The LOT-R has 10 questions. We believe it is important to list them, in order to better interpret what optimism means in this study. We put them in two groups to be able to comment on them more easily. The letter R indicates that the higher the score, the lower the optimism.

1.In uncertain times, I usually expect the best.

3R.If something can go wrong for me, it will.

4.I’m always optimistic about my future.

9R.I rarely count on good things happening to me.

10.Overall, I expect more goog thing to happen to me than bad.

5.I enjoy my friends a lot.

6.It’s important for me to keep busy.

8.I don’t get upset to easily.

The conclusion of the study is very clear. In the population studied, the risk of chronic insomnia is lower in the most optimistic people. The most pessimistic have a higher risk of insomnia. Specifically, the probability of suffering from a sleep disorder and / or insomnia is about 70% lower among optimists than in those who tend to be pessimistic.

The authors wonder whether increasing optimism could be a way to improve sleep quality and decrease the risk of insomnia.

What is the interpretation from NeuroQuotient regarding the influence of pessimism (low optimism) on insomnia?

From the outset, we agree that this influence is very important.

To understand it better it is necessary to see how optimism has been measured.

Most of the questions (the 6 in group 1) have to do with the perception of the future. According to the questionnaire, there is no optimism when we anticipate the future in a negative way. When we do, as we have seen in other posts, we start up the fear (threats) system and stress and suffer anxiety. Being alert we find it difficult to sleep and we wake up easily and frequently. The tendency to anxiety leads to insomnia. Pessimistic neuro behaviors (focusing on the future in a negative way) cause insomnia.

The 2 (It’s easy for me to relax) goes in a line similar to what was commented. Optimism understood as relaxation, without stress or anxiety. If I’am able to relax, then I sleep better.

Two other questions 5 and 6 (I enjoy my friends a lot and It’s important for me to keep busy), have to do with paying attention to the present and in a positive. Being in the present enjoying and busy, I do not worry negatively. Concern with a focus on dangers and threats produces insomnia.

Question 8 remains (I don’t get upset to easily). A low score on it naturally indicates pessimism. Although perhaps it points more to low self-esteem than to high anxiety and insomnia.

Does insomnia lead to pessimism or does pessimism lead to insomnia? What weighs more the symptom (pessimism) or the disorder (insomnia)?

Surely as always, it is something as a loop. There is influence in both directions.

It is likely that with insomnia our performance decreases. In this way, self-esteem can be lower and we favor pessimistic neuro behaviors (negative approach to the future).

However, having seen the two previous articles, we strongly believe that the weight in the pessimism sense (neuro behaviors) favoring insomnia is much greater.

In conclusion, to sleep better and avoid insomnia, it is worth not using the neuro behaviors (brain connections) related to pessimism (and anxiety). Decreasing stress, learning to relax will also help us. Although, as we saw in a previous post, it is more worth avoiding generating self stress than not, then lowering it.

Finally, creating and enhancing neuro behaviors that lead us to live life with enthusiasm in the present and to focus on the future with optimism, will also be of great help to prevent pessimism and avoid insomnia.

The items in the Life Orientation Test -R are a good neuro-behavior guide for an optimistic and positive approach.

Thinking about psychological disorders, we believe that it is very important to identify the symptoms and neuro behaviors associated with each of them. So we can better prevent them (the disorders).