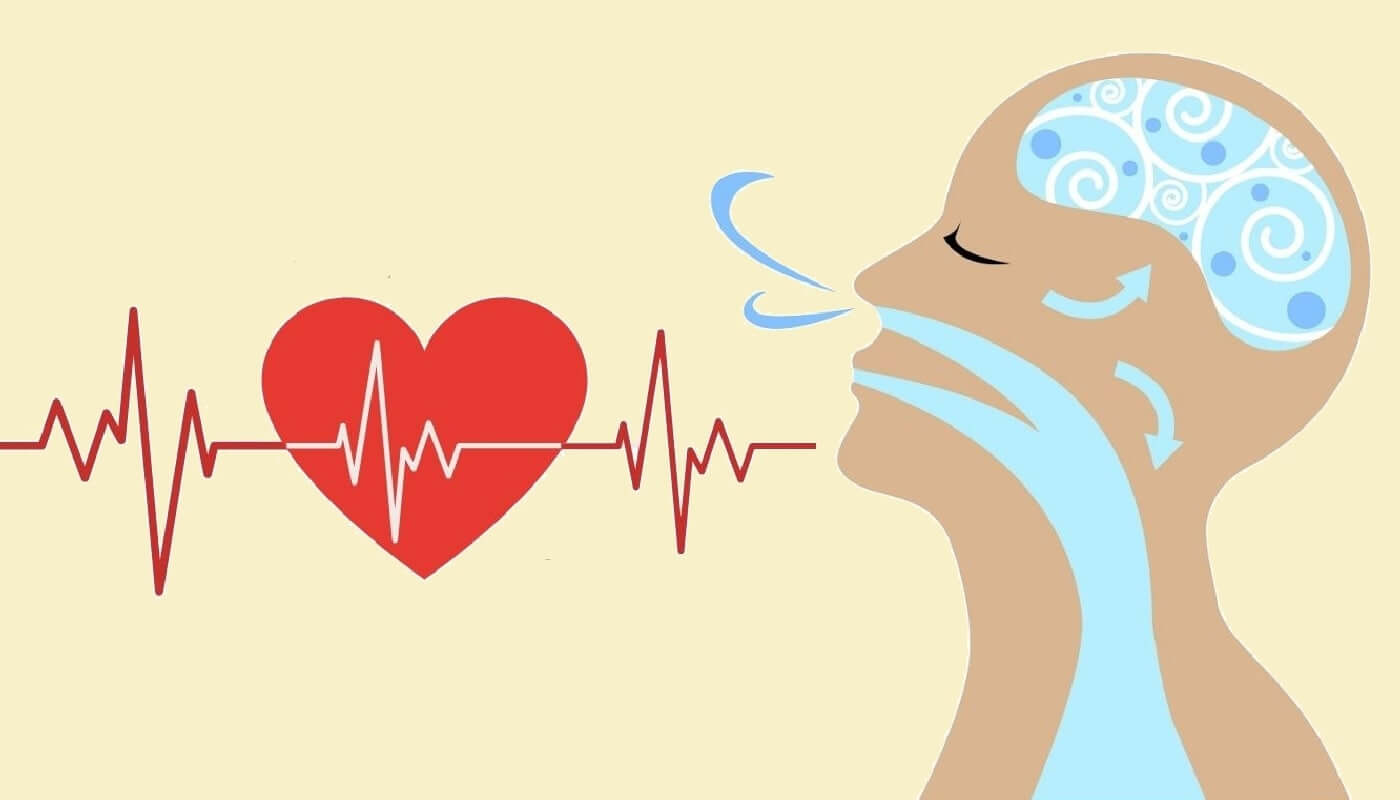 Heart rate, the rhythm of the heartbeat, is related to breathing. Knowing how it works helps us better understand the neuroscience of behaviour and have more resources to improve our well-being. We will see how the brain and the body are connected by the autonomic nervous system and we will give our opinion on two neuroscience articles.

Two summaries that we have read in Neuroscience News serve us as a starting point for writing this article. In it we will inquire into the connection between the brain and the body. Specifically, in the relationship between the brain, heart rate and breathing. Let us remember that the purpose of NeuroQuotient®  is to have more options for well-being from the knowledge of psychobiology and behavioural neuroscience.

We start by looking at what the Neuroscience News abstracts are about.

‘Breathing in through the nose activates the amygdala, the brain centre of fear’.

The first summary is from 2016. The title: Rhythm of Breathing Affects Memory and Fear. It is based on an original publication of Christina Zelano et al in The Journal of NeuroSecience: Nasal Respiration Entrains Human Limbic Oscillations and Modulates Cognitive Function.

Individuals identified a fearful face much more quickly if it appeared to them while breathing in than when breathing out. Furthermore, they were much better able to remember an object if it was presented while inhaling. This always happened when breathing through the nose, if they breathed through the mouth the effect disappeared.

So, we see that breathing, and differently when inhaling and exhaling, influences the brain and human behaviour.

Let’s leave it here for now and see the other article.

“With depression the heart rate is higher and at night its decrease is impaired’.

The original source was an interview to Dr Carmen Schiweck (Goethe University, Frankfurt), about a study that was going to be presented in the Virtual Congress of European College of Neuropsychopharmacology.

They studied two groups of 16 participants. One made up of people with depression and a control group with healthy people. Their heart rates were measured for 4 days and 3 nights. The depressed participants were then given ketamine or a placebo.

After ketamine treatment they found that both the heart rate and its variability of the previously depressed patients were much closer to the values of the control group.

We are not going to go into if ketamine can be a good treatment for depression. We simply keep the idea that the rhythm of the heartbeat has a close relationship with depression. Logically, it will also have it with the depression associated neuro behaviours.

To understand what has been said so far, it is necessary that we see the connection between the brain and the body.

The somatic NS receives information from the sensory organs and controls the movements of the skeletal muscles. But, for what we are dealing with, the relationship between brain and heart rate taking into account breathing, we will stay with the ANS (autonomic nervous system). The function of the ANS is to maintain the balance of the internal environment (homeostasis) by regulating automatically, the cardiovascular, respiratory, digestive, excretory and thermoregulatory mechanisms.

The ANS (autonomic nervous system) has two branches, the sympathetic and the parasympathetic

The sympathetic branch is mainly related to activities associated with the expenditure of energy reserves stored in the body. Thus, the effects of sympathetic activity are more evident in situations of stress, exciting or fear, producing, among other changes, an increase in blood flow to skeletal muscles, stimulation of adrenaline secretion and, with it, a heart rate increase and, also, an increase in blood sugar levels.

The parasympathetic branch is related to activities involved in increasing the energy stored in the body, such as the activity of the digestive system.

So that we can better understand what we will discuss below, it is important that we remember how to do full breathing cycles.

Both in the practice of yoga, as in meditation, as in practicing relaxation techniques, they teach us to do full breathing cycles.

Complete breathing cycles consist of the following (Fig 1 serves us as a guide):

After thoroughly expelling the air from the lungs,

Let’s leave it here for now, then we get back to it.

Heart rate variability is continuous, not just between day and night.

‘When breathing in the heart speeds up and when exhaling it slows down’.

But, is that the heart rate is not constant, it oscillates continuously! When taking our pulse to measure our heart rate, we count the number of beats in a minute. But, in this way, we are measuring an average value! Actually, the time interval between consecutive heartbeats is not kept constant.

It happens that when breathing in the heart speeds up and when exhaling the heart rate slows down. We can test this by doing a couple of cycles of full breathing while taking our pulse with our thumb on the wrist. We will see that as we breathe in, the time interval between consecutive beats shortens. On the contrary, when the air is released, the pulsations become more spaced.

A more accurate check of how the heart rate varies with breathing.

We can check that the heart rate fluctuates with respiration with the Doc Childre HeartMath Freeze-Framer application that we have been using since 2005. (In HeartMath you will now find more current applications for smartphones).

Freeze-Framer detects the heart pulse with a sensor placed on a finger (or on the earlobe). The computer application calculates the instantaneous heart rate from the time interval between every two consecutive beats.

We have measured the instantaneous heart rate for near 4 min while doing full breath cycles. In Fig 2, we see that the heart rate has been following an almost sinusoidal curve. In each cycle, the frequency has increased as breathing in and has decreased as exhaling.

Figure 2. Heart rate with consecutive full breath cycles. When you breathe in, the rhythm of the heartbeat increases and when you exhale it decreases.

During the time of the test, the average of the peaks of the curves was 77 heartbeats per second and the valleys were 65. The average heart rate was 71 beats per second. That is, if we had divided the total beats by time in minutes, the result would have been 71 heartbeats / second.

The rhythm of the heart and the autonomic nervous system

But there is something even more interesting. Let’s go back to Heartmath and Doc Childre et al. Specifically to the book ‘The Hearthmath Solution’ (HarperCollins Publishers, 2000).

We cannot fail to introduce the principle of The HeartMarth Solutions technique. They explain that the variability of the almost sinusoidal heart rate (cardiac coherence) is achieved when we are in positive emotions such as appreciation, love and care for others. When we feel emotions such as frustration, anger, etc. the heart rate goes up and down irregularly, and a broken line is recorded.

In addition, for HeartMath, cardiac coherence and being in the zone are synonymous. In NeuroQuotient® we talked in another post about being in the Zone and Flow as similar terms.

But, for this article, the most important thing is that we can achieve and train cardiac coherence by practicing conscious full breathing as well.

A summary of what was seen,

Before going to the conclusions and seeing how we can take advantage of these ideas to improve our satisfaction and well-being, it is convenient that we collect a summary of what has been discussed so far. Just as headlines:

The understanding of neuroscience provided by NeuroQuotient® allows us to comment on the following:

In previous posts (about stress or the relationship between memory and behaviour) we said that when our brain perceives a threat signal, the amygdala is activated and then the stress fast track (sympathetic ANS). In this way we are ready to face the threat (fight) or run away (flight).

Now we see (point 1, previous section) that the reverse also happens. When we breathe in, the amygdala is activated … because we activate the sympathetic ANS.

How can we take advantage of what we have learned?

The most important thing is that we see that not only the unconscious brain influences the body, but by directing the breath consciously, we can influence the heart rate and our emotional state.

Finally, there is something else that we have not gone into, but that will help us. We have seen that the heart rate accelerates more when inhaling and in the second stage of complete breathing (when filling the upper part of the lungs with air). This reminds us that when we breathe mainly with the chest, we tend to do it faster, the sympathetic ANS is more active and the heart rate is higher. For this reason, to relax, it is important to practice abdominal breathing.

By consciously breathing we can, for example, start with a few full breaths and then focus on getting air in and out mainly from the lower lungs. That is, practicing abdominal breathing.

Impulsivity in education from neuroscience. Technology versus Nature.