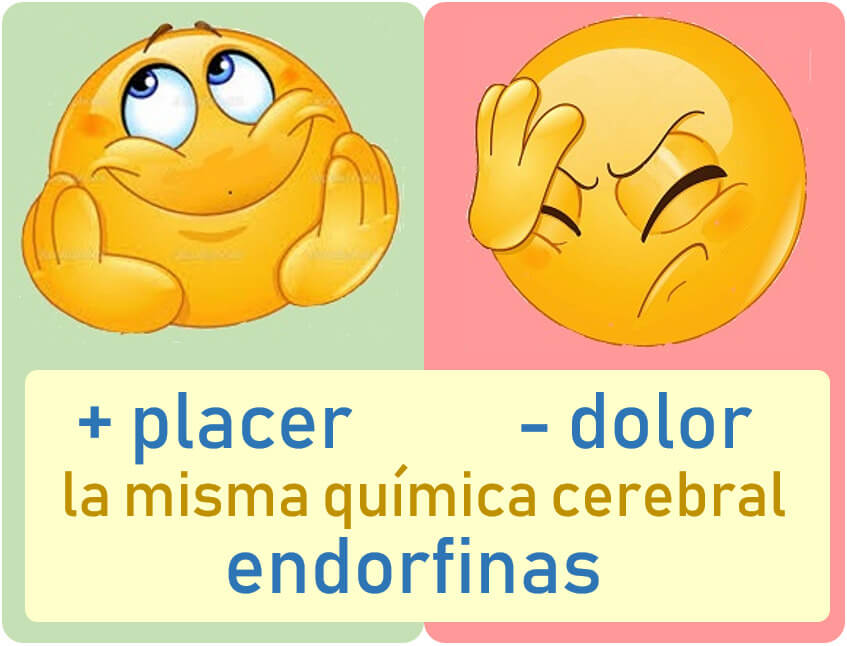 Endorphins generate pleasure and soothe pain. These endogenous opioids mutually enhance each other with phasic dopamine, the central neurotransmitter of the reward system. A positive mental focus -plus the reward system- help us to improve mood, endorphins, pleasure, and to soothe the pain. While, with negative thinking endorphins and pleasure are low, pain increases and mood goes down.

We had on the NeuroQuotient® agenda, for a long time, the idea of writing about endorphins and mood, and their relationship with pleasure and pain.

A few words from Marta Ligioiz – a speaker at a meeting of AEDIPE Catalonia on ‘neuroscience applied to people management’ – reminded us of our purpose.

Speaking of endorphins, he said more or less the following: ‘There are days when everything hurts and every time we feel worse. We are not aware that, precisely, we feel pain because our mood is very low. Encouraging us is the way to find ourselves physically better.

And it is that endorphins, pleasure and pain are intimately connected. With the positive mood endorphins are generated.  Endorphins not only produce pleasure, but also soothe the pain. Quite the opposite of the negative vicious circle: ‘I’m not feeling well, everything hurts, I get discouraged more and feel more pain.

But what happens in the brain so that endorphins, pleasure and pain and mood are connected?

We will explain it from a great article by Siri Leknes and Irene Tracey (A common neurobiology for pain and pleasure – Nature Reviews Neuroscience). This article was very important for the consolidation of the NeuroQuotient® model and help us to explain the brain bases of behavior.

Well, the key is in the brain reward system, which favors behaviors that are rewarded with pleasure. We discussed about the reward system in a post about ADD.

The central neurotransmitter of the reward system is the dopamine that is generated in the neurons of the ‘ventral tegmental area’ (VTA) in the midbrain. When a reward sensory signal reaches the TVA, dopamine is released in another limbic center of the brain, the ‘nucleus accumbens’ (NAc).

It is very important to keep in mind that the sensory signal can be lived or remembered or imagined. Our brain does not distinguish between what it perceives directly from what we remember or imagine! Hence, ‘focusing’ on positive, or not, is decisive in terms of endorphins and pleasure and pain.

It is also worth remembering that dopamine does not directly provide pleasure. It only intervenes in the motivation of behaviors that, likely, will be rewarded with pleasure. The feeling of pleasure – the hedonic experience – is related to other molecules. With a type of neuropeptides, specifically with endogenous opioids, of which endorphins are part.

They are called opioids because they bind to the same receptors as opium derivatives, such as morphine, heroin, etc. They are endogenous because they are generated by the body itself. And they are classified according to the type of synaptic receptors for which they have greater affinity.

Endorphins have the highest affinity for µ (mu) receptors.

In the endorphins there is the explanation of the relationship between pleasure and pain.

Endorphins -which are released, also, in the ‘nucleus accumbens’- not only increase the feeling of pleasure, they also act as analgesics, calming the pain.

Then, not all dopamine is the same nor has the same effectiveness. Something similar we saw that happens with serotonin. Neither a large amount of dopamine is a guarantee to properly implement the reward system, nor a lot of serotonin mean well-being.

And there is another very important relationship between endorphins and dopamine. Endorphins increase phasic dopamine and decrease tonic dopamine. This effect of endorphins on dopamine is through inhibiting GABAergic interneurons of the ‘ventral tegmental area’ (VTA) (* see comments at the end of the post).

That is, phasic dopamine and endorphins reinforce each other. We can say that we enter a loop in which positivity and pleasure are feed backed:

There, then, is the explanation for the proposal of Marta Ligioiz. Remembering once again that the reward predictive stimulus can be internal (imagined or remembered). That is, positive mood increases endorphins and pleasure and decreases pain. And at the same time improves the mood. We are therefore facing a circle that enhances mood and well-being (Fig. 1)

Let’s not forget that by taking benzodiazepines (tranquilizers and sleeping pills), we can also negatively affect our mood. Benzodiazepines slow down dopamine and reduce endorphins and pleasure.

Sometimes we are worried and stressed, we have trouble sleeping and we take tranquilizers and / or sleeping pills. The most common are benzodiazepines. In another post when dealing with stress, we saw that benzodiazepines are agonists (they act the same way) of the GABA neurotransmitter and slow the activation of the amygdala, fear and stress. Perfect!

However, in the ventral tegmental area (VTA) there are also GABAergic interneurons that, if active, slow down the release of dopamine …

* Keep in mind that GABA is the main modulating neurotransmitter. By decreasing GABA, more dopamine is released. Do not forget that the benzodiazepines that are used to calm anxiety, reduce stress and as sleeping pills, act as the GABA neurotransmitter in the interneurons of the amygdala. But, they also act in the ventral tegmental area (ATV), slowing the release of phasic dopamine, with the consequent loss of response to reward stimuli and affecting mood in a negative way.

How to improve self-esteem and mood (from neuroscience).

Stress, anxiety and neuroscience. When anxious we escape faster from a fear stimulus.