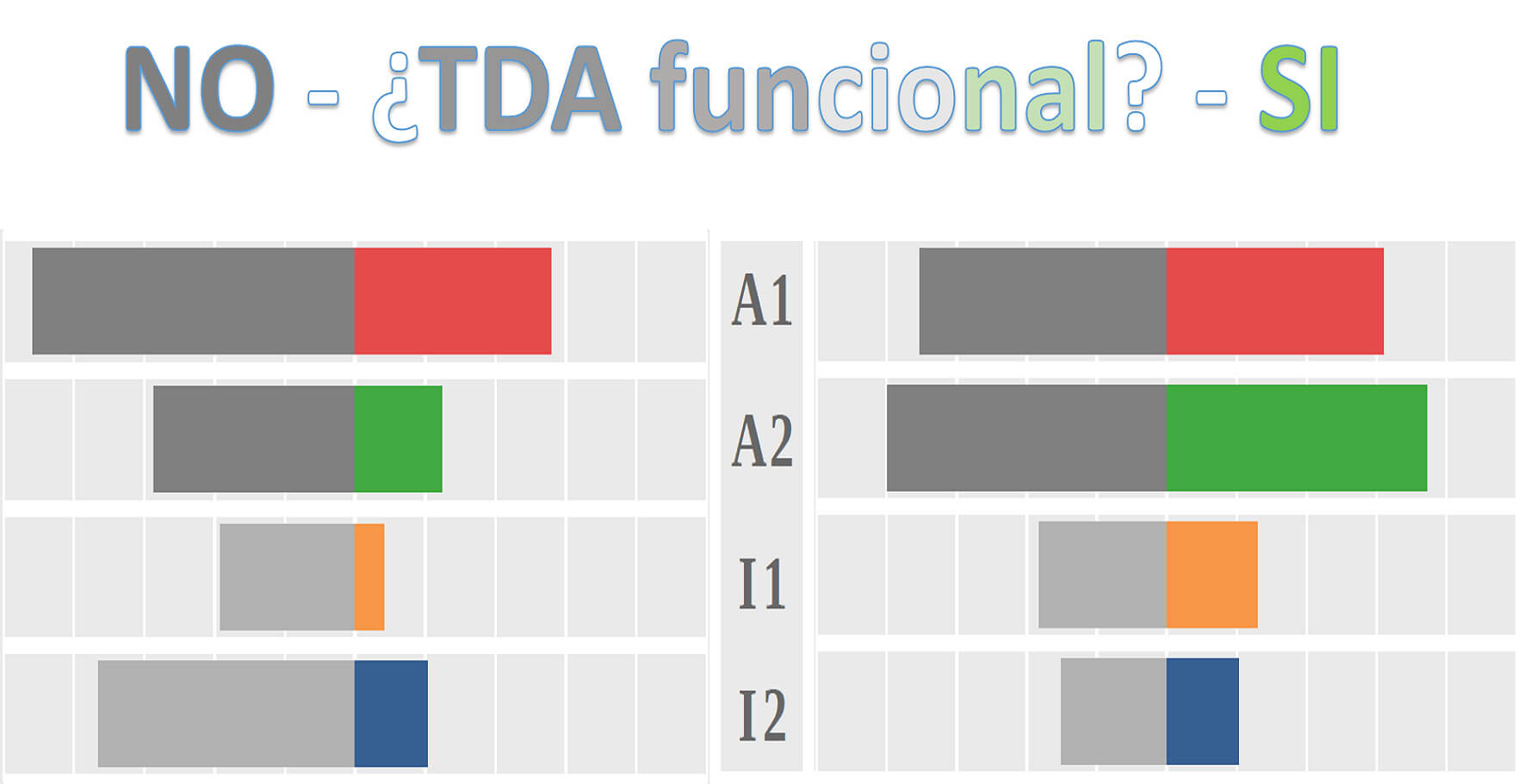 A post about the ADHD, attention deficit disorder, in children with a high IQ (Intelligence Quotient) help to us to approach this disorder with NeuroQuotient and to understand its neurological pathways. When we understand what happens in the brain, we can design strategies to overcome it in a functional way. Then, these people can take advantage of their high potential.

Since a long time we have been interested in the neurological foundations of ADHD (attention deficit disorder). This interest was previous to the NeuroQuotient® creation. More in cases where it is related to a high intelligence quotient, IQ, (gifted people). And, moreover, when there is no physical hyperactivity (ADD without H).

Anyway, although more focused on these points of interest, what is dealt with in this post is valid for the ADHD in a whole way. Above all, with regard to the brain structures that influence the attention deficit disorder, and how the neuro tool helps us to understand them and to think of ways of coping.

We have already approached on the ADD, Attention Deficit Disorder, when talking about the timeline in the brain.

But now, we have just found a post from 2011 by Thomas E. Brown, totally relevant. It will be very helpful for approaching directly the subject. The mysteries of ADHD and high IQ.

The article is from 2011, but nonetheless it is very interesting as a starting point for reflection and to connect the ADD (attention deficit disorder) with its brain foundations.

In this post, the author tell us about a study conducted with 117 gifted people, children and adolescents, with a high IQ and diagnosed with ADHD (both with hyperactivity and without hyperactivity).

What are the most frequent symptoms in ADHD (attention deficit disorder)?

Before summarizing the article it is worth to remember some of the symptoms that occur with ADD in the school:

These symptoms are attributed to a certain vulnerability in executive functions. Those of the prefrontal cortex (CPF).

What happens in gifted children with ADD (attention deficit disorder)? How do they evolve in adolescence and later?

Brown speaks us about 5 points that the parents and the teachers find and which are confirmed in their study. We completely agree all of them:

1. In most of the studied cases there is no hyperactivity. That is, it is about ADD (attention deficit disorder. Not about ADHD (attention deficit hyperactivity disorder).
2. ADDs children can have a high IQ (Intelligence quotient). In fact, it is the premise of the study. That is to say, they do not lack mental abilities, but they have difficulties to take advantage of them to do the work in an effective way.
3. Many gifted children are successful students in elementary school and fail recurrently in the high school. Some do not start having problems until college.

In fact, often they arrive further depending on the support of the parents in helping them to prioritize, plan and follow up to complete the work.

4. All the participants in the study have some activity in which they do not present any difficulty to exercise successfully their prefrontal executive functions.

It is why, the most respond: “If something really interests me, I can keep the focus. But, if I do not find it really interesting, then I can’t. Even if it’s important and I need to do it. “

5. Can it be overcome in adulthood? In 80% of cases, the basic problem persists. But, some surpass it. Some because, simply, they have a delay of 2-3 years in the cortical development and as they grow the problem disappears. Others outgrow it with medication.

Anyway, in many cases, while remaining the difficulties, they have a good incorporation to the labor world. This is because they specialize in jobs that are interesting to them, and they perform them successfully.

How does neuroscience help us to better understand what happens with ADD (attention deficit disorder)?

But, we have to remember that the purpose of this paper is to connect Brown’s conclusions with the brain foundations, taking advantage of the knowledge of neuroscience that is acquired with the certification in NeuroQuotient®.

Broadly, we agree the Brown’s approach. However, we think he simplifies too much concerning to the brain bases. He centers all the problems on the difficulties of certain prefrontal functions. Let’s see why we think in this way:

In point 5, Brown talks about medication. Specifically, of the medication with dopamine enhancers.

Certainly, dopamine is the central neurotransmitter of the brain reward system. The reward system favors behaviors by rewarding them with pleasure. Although -it worth to remember- dopamine does not produce pleasure.

There are three important dopamine pathways in the brain.

One of them is the mesocortical. It goes from the ventral tegmental area (VTA) in the mesencephalon to the prefrontal cortex. This pathway favors focus and attention. If there is not enough mesocortical dopamine, there are difficulties in some prefrontal functions. What Brown tells us: prefrontal vulnerability.

But, the other two pathways are also very important and the consequences of the lack of dopamine in ADD (attention deficit disorder) are also glimpsed, albeit indirectly, in Brown’s post.

On the one hand, the so-called mesolimbic route. It goes from the mesencephalon (the same VTA) to a limbic area of the brain (the nucleus accumbens). This is the one that is involved in motivation. In the desire. In point 4, Brown says that when something really motivates them they do it, without presenting problems of concentration.

In ADD (attention deficit disorder, there is not only vulnerability in the prefrontal zone (mesocortical pathway), but also in the limbic part of the brain involved in the approach motivation (mesolimbic pathway).

Our point of view is that the lack of motivation lies, also, in the general deficit of the dopaminergic system. There is also little mesolimbic dopamine. When the interest increases, motivation and concentration grow at the same time. Therefore, by potentiating dopamine with medication, motivation and concentration increase simultaneously. So, that’s why, to overcome the problem it, also, makes sense to look for ways to influence on endogenous dopamine.

The third dopaminergic pathway is the one that goes from the ‘substantia nigra’ -in the mesencephalon, also- to the dorsal striatum and is related to habits. Because of this, they also have difficulty in creating habits. Problem that underlies, mainly, in the little capacity to organize themselves.

Complementing the medication, in childhood and pre-adolescence, with a support aimed at the creation of habits, is a great help to achieve a functional ADD later on.

Overcoming the ADD (attention deficit disorder) means that these people generate the resources that allow them to take advantage of their great potential. NeuroQuotient helps us to understand it.

In 80% of cases, ADD is difficult to overcome in adulthood, but it is not so difficult to reach a functional ADD. Even with great success. Where is the key?

NeuroQuotient explains it to us.

Before, remembering that the neuro tool should not be used to diagnose psychological disorders. However, it is an indicator of some of them when some of the limitations (gray bars) are large; when they are in the last frame.

Let’s look at the case of two people with a high IQ index. One with functional ADD and the other does not. In the following image we compare the graphs.

In both we see that the limitation A1, which points to ADD (attention deficit disorder), is very high.

The difference between functional ADD (right) and non-functional ADD (left) is in the greater self-confidence acquired with the achievement of tangible results (higher green bar). And in the subsequent higher self-esteem (smaller gray I2 bar).

Overall, the NQ index that measures the level of self-leadership (how high are the efficiencies and how low are the limitations) is clearly superior with functional ADD. 71.9 versus 51.0.

How to focus development? The neuro tool explains it to us.

What is the way for development? The key is that we focus on a topic of interest (motivator) that, at the same time, provides us valuable tangible results. The achievement of results will help us to increase self-confidence and self-motivation.

So, we’ll It break the cycle of frustration derived of moving by impulses to non-valuable purposes, and with a scattered mind. One key is to stop the search of the immediate reward. (Do you remember the marshmallow test?)

Organization, working with method, logically, also helps to avoid dispersion and the achievement of results. That’s why, a support to generate these habits, as soon as possible, is very important.

Gifted children do not need organization and method to overcome challenges at school. They supplement it with their intelligence. However, as they grow up, when the difficulties become greater, they find that they have not generated the resources (organizational habits) that the rest of us mortals use.

How are memory and behavior related? by NeuroQuotient®