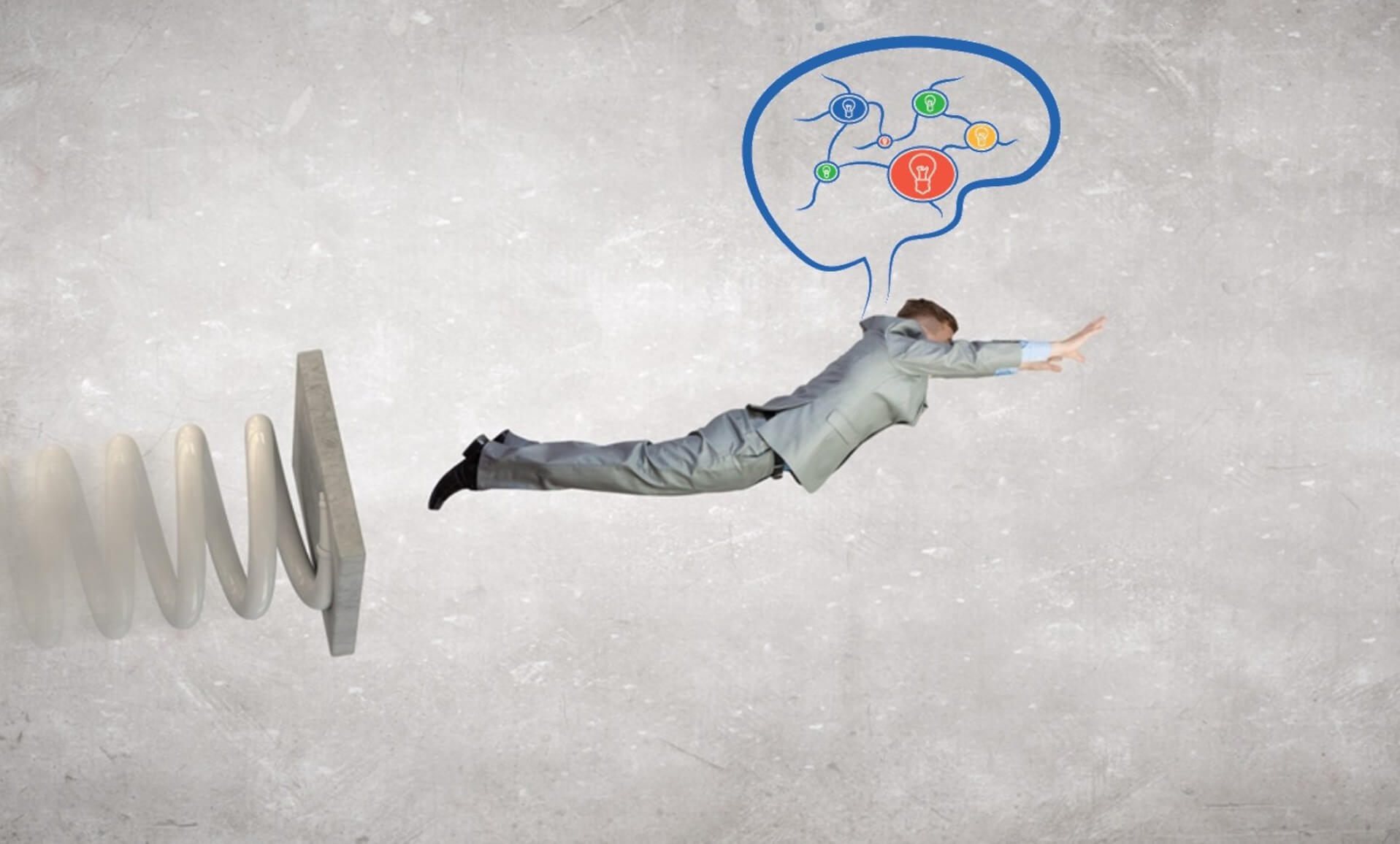 Being able to connect neuroscience and coaching is important for the people development, especially of the leadership. So, we can practice neurocoaching. We reviewed the path that led us to create NeuroQuotient®, the tool that makes it possible in a practical and efficient way. A path with high expectation, false myths, some frustration and, since a long time, with results.

A little history to place us.

Since the end of the last century advances in the understanding of the human brain and its relationship with behavior are being exponential. That is why, in the 21st century, it is essential to take advantage of this knowledge for people development. Therefore, the connection between neuroscience and coaching and leadership development is becoming more important.  By creating NeuroQuotient® we want to do it more understandable and practical.

Neuroimaging techniques such as fMRI (functional nuclear magnetic resonance) allow us to observe which brain centers are activated when we perform a certain task. From here, neuroeconomics and neuromarketing have been developed, for example. In both cases we try to answer the question: what happens in the brain when we make decisions?

Anyway, these studies do nothing more than confirm the previous work, of psychobiology, carried out in laboratory animals. This is because the brain structures are very well preserved from one species to another. Our brain is not very different from that of a guinea pig. Except for the prefrontal cortex (CPF), naturally. The motivational and memory limbic centers are similar. The neuroimaging techniques have allowed to observe in a non-invasive way the connection of these centers with the PFC.

It is important to make clear that when talking about neuroscience and coaching, about neurocoaching, we are not referring to NLP (neurolinguistic programming) applied to the people development.

John Grinder and Richard Bandler, the creators of NLP, were successful to use the word ‘neuro’ to name the result of their work. And it is that the ‘neuro’ attracts, it helps to sell. However, NLP is not neuroscience. But, taking advantage of its slipstream, a first version of neuromarketing and a first neurocoaching emerged. More than one has signed up for NLP looking for neuroscience, right?

With this we do not say that NLP is not useful to connect neuroscience and coaching. Once the cerebral bases of behavior are understood, NLP techniques can be very useful for the leadership development.

Our approach to neuroscience and coaching.

In 2001, 19 years ago, we began our journey as coaching professionals and, simultaneously, in NLP. Since then we were looking for the connection between neuroscience and coaching, the neurocoaching, thinking about applying it to the leadership development.

On this path there are some culminating points, which are not the final ones, which are a master’s degree in neuroscience (2009-2010) and the creation of NeuroQuotient (2010-2103). Anyway, we want to point out some milestones, in the form of books, that we now remember as important and that can help us in this connection between coaching and neuroscience and leadership development. Above all, in what we consider key: the need to be able to understand the brain foundations of human behavior; and the connection of the limbic centers with the prefrontal cortex.

Although, these books are only references that have been helping us to confirm that we were on the right track. Actually, the information we used for the creation of NeuroQuotient were basic neuroscience articles and reviews. Case apart is the book,

that we can define as a great compilation of reviews and articles that was essential in the generation of NeuroQuotient®.

As for the books, in order of reading.

and, finally, one that we discovered just when writing this post. by its title it is the most pertinent to establish the nexus between neuroscience and coaching,

Amy Brann. Neuroscience for Coaches. How to Use the Latest Insights for the Benefit of Your Clients. Kogan Page, 2017

This book does not fall into our hands until now, because since 2013 we have been using NeuroQuotient®  to make the conection between neuroscience and coaching for the development of leadership. But, sure, we will learn a lot from it.

A little dopamine and a lot of serotonin.

When we talk about neuroscience and coaching, it is very likely that the first thing that comes to mind are neurotransmitters. The molecules that facilitate the connection between neurons in neuronal synapses.

If we did a survey we can be sure that the neurotransmitters most cited would be serotonin and dopamine. Then, perhaps, oxytocin and adrenaline, although these two are more neurohormones than neurotransmitters.

And this, why? Well, because both with dopamine, and serotonin the simple word conveys a meaning to us. We do not have to study hard. Their names suggest their functionality. An erroneous assumption, but it seems that we understand it. Perhaps other neurotransmitters, such as glutamate or GABA or acetylcholine, are more important, but at the outset, they do not tell us anything directly.

dopamine sounds like ‘dopping’ and pleasure. serotonin to tranquility. there we have another case of marketing success, how the nlp. especially, with serotonin.

Everything is much more complicated. the brain has between 50 and 100 billion neurons!

But it is much more complicated. The brain has between 50 and 100 billion neurons. Of dopamine there are many types of receptors, for instance.

For example, when a dog perceives a bone, its spices memory indicates that it is a signal of reward. Dopamine is in the motivation of action to eat the bone, not in pleasure (endorphins are responsible for this). If the bone is poisoned the result will not be exactly pleasant.

Do not forget, in addition, that dopamine is also part of the mesocortical pathway of the reward system. This way favors the focus of attention towards the ‘object of desire’ that has awakened the reward system.

Not always a lot of serotonin is suitable.

On the other hand, the word serotonin transmits serenity. In addition, we are prescribed serotonin enhancers (selective serotonin reuptake inhibitors, SSRI) to treat depression. Fuoxetine (Prozac), for example.

However, they do not tell us the paradox of serotonin.

They do not explain to us that people genetically more prone to depression have less effective serotonin reuptakers. That is, they have more free serotonin. We finally understood it, after giving it many laps, thanks de Gordon Book chapter 6 “ James J. Gross (editor). Habdbook of Emotion Regulation. The Guilford Press, 2007. (On “Genetics of Emotion Regulation” pag. 110 and “the 5-HTTLPR-SSRI Paradox pag. 124 (Ahmad R. Hariri, Erika E. Forbes)”.

So, everything is much more complicated! It is not enough to identify the role of some key neuro transmitters! It is not easy to connect neuroscience and coaching for leadership development. For this reason, to simplify it, with NeuroQuotient® we identify what is most relevant within this complexity.

Facilitate awareness. A very important coaching competence. How to enhance it with coaching and neuroscience, with neurocoaching?

Creating Awareness is the 8th coaching competence according to the ICF. They define it like: ‘Integrating and accurately evaluating multiple sources of information and making interpretations that help the client to gain awareness and thereby achieve agreed-upon results’.

And we ask ourselves, how could we use the connection between neuroscience and coaching to facilitate awareness?

In coaching, especially when it comes to leadership development, tools are used to facilitate awareness. Some are about the personality and quite a few of them we have seen in this blog. DISC, MBTI, Discovery Insights, Enneagram, Only in DISC, William Moulton Marston, its creator, thought about a far connection with the neuroscience.

So, we proposed, at the beginning of 2009, to create a tool to connect coaching and neuroscience.

For this it was essential to have clear the fundamentals of neuroscience. Then, try to identify what is key, to be able to define a simple structure (a model) that will sustain the relationship between brain and behavior.

The first point was addressed with a master’s degree in Psychobiology and Cognitive Neuroscience. The second, studying basic neuroscience, trying to find the fundamental brain systems that simplify complexity.

And, at the end of 2011 many ideas of what we had studied from previous years, not only of neuroscience, crystallized in a first structure for the model. (The key elements for this ‘fusion’ of ideas will be discussed in another post).

What does NeuroQuotient® bring us in the neuroscience and coaching connection?

In mid-2014 the web application was running. With it, those of us dedicated to the development of people, especially of the leadership, can connect neuroscience and coaching. After Certifying in NeuroQuotient®, we can send questionnaires to clients and then interpret the results and prepare the reports, which are derived from their answers.

The main contributions of NeuroQuotient can be seen on this website or participating in one of the free introductory workshops). Or, better, contact us and we will provide you with the information you require (+ info).

It facilitates a quick awareness of the brain processes that help each one to satisfaction and leadership.

The customers answer about their current and desired status. Comparing both, they easily perceive which is the priority where to focus his action for a more efficient development.

NeuroQuotient® is the neuro tool of the coach to boost better, faster and easier the satisfaction of their clients.

Coaching tools and personality models for the leadership development (tools 1).