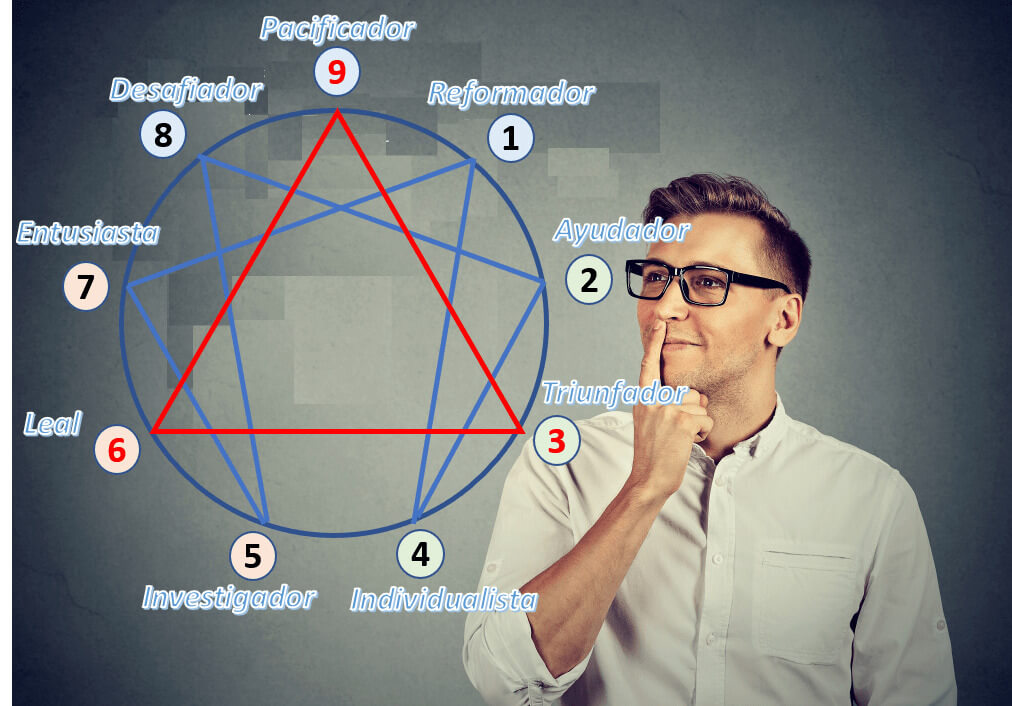 We describe the foundations of the Enneagram, and its nine personality types  or enneatypes to assess its use in people’s development and coaching. We found that the identification of our enneatype based on the Enneagram is quite confusing. From what we have learned, we propose a way to find out in a simple way the type of personality according to the Enneagram.

The Enneagram, the model of the nine personality types or enneatypes, is widely used in people’s development. That’s the reason why we have decided to include it in this series of articles on coaching tools. As in other cases, we will seek to understand its foundations and assess its suitability to be used in coaching and people’s development.

One of the purposes of the Enneagram is to increase awareness about oneself and from there to promote the development. The same thing we look for in NeuroQuotient, but with a fundamental difference. In NeuroQuotient® we do not deal with personality, only with behaviour and with its cerebral foundations (neuro-behaviours).

Our approach to the Ennegrama, to simplify it within the framework of a post, has been quite difficult. Much more than when we deal with the DISC or MBTI or Insights Discovery models. This is because the Enneagram does not have a simple structure that supports it and facilitates the identification of the nine personality types.

The tools we discussed in the previous posts have simple models that support them. The William M. Marston’s model concerning the DISC. In the MBTI the theory of Carl Jung adapted by the Myers-Briggs ladies. And in the Insights Discovery, also the psychological functions of Carl Jung’s consciousness adapted by the Lothian lords.

In the case of the Enneagram, it is much more uncomfortable to answer the question

With which of the nine personality types of the Enneagram do each person feels identified?

So that we can learn the fundamentals about the Enneagram, we will focus on two great experts: Richard Riso and David Daniels. From his works:

Anyway, to solve the difficulty of identifying our personality type according to the enneagram, we’ll make a proposal of an alternative system. We’ll see it later.

The symbol is part of the traditions that gave rise to the Judaism, Christianity and Islam religions. This symbol is made up of three parts: the circle, the triangle and the hexagram.

The introducer of the symbol in the modern world was George Ivanovich Gurdjief (1875). Along with his friends sought to learn as much as possible of the ancient traditions. They
named themselves ‘Seekers After Truth’ (S.A.T.).

The most recent recovery was made by Oscar Ichazo and, above all, by his disciple Claudio Naranjo (Valparaíso, Chile), psychiatrist in the Gestalt current.

In the seventies, Naranjo worked with panels of people to consolidate the characteristics of each type. Defining the traits of each of the nine personality types. This Naranjo work cleansed the Enneagram from most of the esotericism that it could initially reflect.

Claudio Naranjo created and develops the program S.A.T. whose purpose is to carry out a psycho-spiritual task that embraces both the therapeutic and the contemplative aspects. In the therapeutic aspect, it is based on a deep investigation of infant conditioning through the Psychology of the Enneatypes. He retained the name of (S.A.T., Seekers After Truth).

The number of each personality type in the Enneagram symbol and some structure from the ‘triads or centres’.

To be faithful to our purpose, of making the complex affordable, we will start by placing the 9 numbers of the enneatypes on the enneagram symbol. (Fig 2)

On the triangle is located the 9 at the top vertex and the 3 and the 6 at the base. The 3 on the right and the 6 on the left. The rest of the numbers of the other of nine personality types are placed on the hexagram. Starting with the 1 on the right of the 9 and continuing in the direction of the clockwise. The 9 personality types of the Enneagram are correlated from the 1 to the 9 on the circle.

Types 9, 3 and 6 are in the middle of what are called ‘triads or centers’ (Fig 3.). Each ‘triad’ encompasses the personality type anterior and posterior.

The first step to development, remember, is the awareness. In this path ‘the triads or centers’ play an important role. They are based on the three centers of the human psyche: instinct, feeling and thought. They focus, respectively, on doing, feeling and thinking. It is worth remembering that in NeuroQuotient, when we talk about neuro-behaviours, we are referring to doing, thinking and feeling, like a whole, and their cerebral foundations.

A triad indicate a main unmet need. Let’s see a summary in Tables I.1, I.2, I.3 of each of them and the personality types of the Enneagram that constitute it.

The personal development with the enneagram is very deep. Once we have identified our enneatype, the possibilities of self-awareness that we can acquire is very valuable. However, the first step, determining our personality type in the Enneagram is complicated. This is due to the lack of a simple basic structure.

Looking for a simple way to locate our personality type in The Enneagram.

But, in this blog we are looking for more the practicality than the transcendence and we have tried to simplify this selection. We believe that it is possible to do it from the DISC model and the so-called Social Styles or Hornevian groups of the nine personality types of The Enneagram.

At the end of the post we will find a brief description of each of the nine personality types of the Enneagram. But before, we are going to make a proposal of structure. From there we can select our approximate type and in the final descriptions we will see if it fits more or less to us.

We can remember that the DISC model is structured in a 2 × 2 table. The 2 × 2 = 4 DISC personality types according to the Marston’s model are defined based on two dimensions. 1. Perception of oneself as superior or inferior to the environment (motor self) and perception of the environment as unfavorable or favorable (motor stimulus).

What would happen if we used these same two dimensions to situate the nine personality types of the Enneagram? Actually, the enneatypes can be placed in a 3 × 3 table. Only an intermediate value, neither high nor low, would be necessary in each of the two DISC variables.

After looking in depth at each of the nine personality types of the Enneagram, it seems quite accurate that those that correspond to DISC are D = 8; I = 7; S = 2; C = 1 (Figure 4 left).

But, in the intermediate cross to have a 3 × 3 table which enatypes can we place? (Figure 4 right)

We believe that the solution is in the Social Styles or the Hornevian groups.

The Social styles or The Hornevian groups

The Hornevian groups indicate the social style of each personality type, and the way in which each one satisfies their primary needs that the triads indicate.

There are three styles: aggressive, withdrawn and compliant.

The group of aggressives include types 8, 7 (we had already placed them in the row above), and 3. The 3, in the upper vertex of the red isosceles triangle (see Figure 4). So, type 3 will surely be the one that will fit in the middle frame between 8 and 7.

Thinking more about the expectations of others than their own, it is very likely that with these guys feel inferior to the environment, right?

The group of compliants includes types 1 and 2 (we had already placed them in the bottom row) and 6. The 6 in the upper vertex of the blue isosceles triangle (see figure 5). The 6 we can put between 1 and 2.

A triad indicate a main unmet need. Let’s see a summary in Table I of each of them and the personality types of the Enneagram that constitute it.

We would then have the Table of Figure 6.

Then, how can we identify our approximate personality type in the Enneagram, from the Social styles and the DISC model?

From here, from the 3 × 3 structure that we have proposed, we could try identifying our personality type in the Enneagram, asking the following questions.

1. In the face of difficulties and stress?

In which box of Figure 6 do your answers cross? This would be your approximate personality type in the Enneagram.

Description of the nine personality types. Do you feel identified with it?

We will briefly describe each of the nine personality types according to the Enneagram. In this way you will be able to verify if for you the quick system of identification of the enneatypes that we have devised works. Then if you want, you will be able to learn and deepen more in the Enneagram and in your development from the bibliography that we mentioned at the beginning.

So far, we have named each type of personality in the enneagram simply with a number. This is how experts recommend it. We totally agree with that. As soon as we give it a name we stop learning, because we interpret it according to the meaning that this name previously had for us.

But anyway, we will name the nine personality types according to Riso and Daniels Table 2. And in Table 3, we will put a brief description, also starting from both authors. From the outset, we can see that neither name nor description exactly match! This is another disadvantage of not starting from a simple basic structure.

It is also worth noting that all descriptions include strengths and opportunities for improvement. This is because the nine personality types in the Enneagram can be at different levels of development. We have been saying that one of the problems of personality models based on types is that they tend to pigeonhole and hinder transversal development. At least, the Enneagram clearly raises the development within each of the types.

Table 2, the nine personality types according to Riso and Daniels

Table 3 The nine personality types according to Riso and Daniels