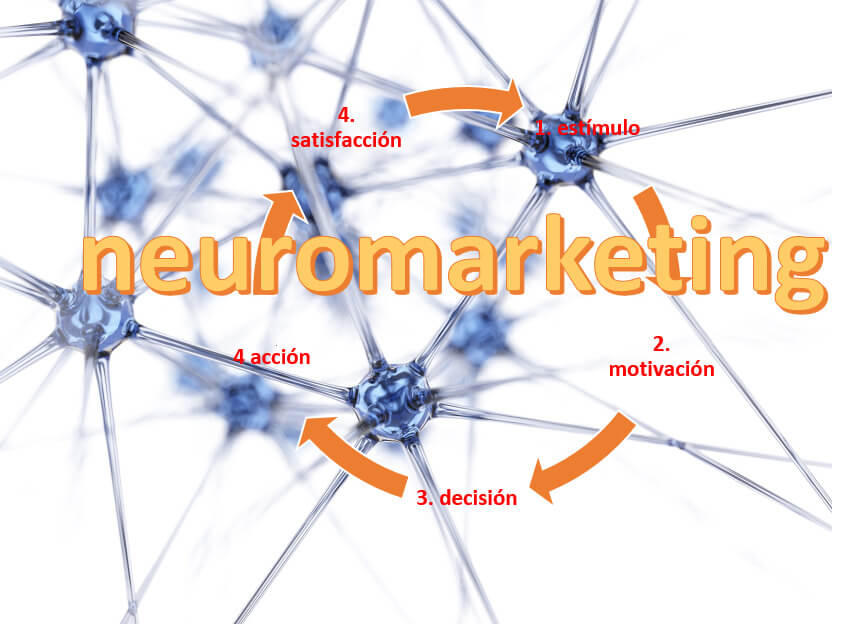 After getting into neuromarketing, we will see how NeuroQuotient® helps us understand the types of approach and response to marketing stimuli. We have defined them as purchasing decision-making styles. Although they range from the perception of the stimulus, and its relationship with the individual’s motivation, to the decision-making to satisfy their need.

The purpose of this blog is to facilitate understanding of the relationship between the brain and human behavior. We achieve this thanks to the NeuroQuotient® model and the neuro-tool derived from it.

This post will help us understand how we react to a marketing stimulus and how we make a purchase decision. This is influenced by the most intense emotional need of each one and how the rational part, the Prefrontal Cortex (PFC) interacts.

We will also understand why the neuro tool is very useful to make neuromarketing studies more precise.

We can define neuromarketing as the application of neuroscience principles to market research and to the study of consumers regarding their response to marketing stimuli. For more details see wikipedia.

It is true that, at the beginning of this discipline, in many cases there was much more marketing than neuroscience. The word ‘neuro’ was used as something new, differentiating, that attracts sales. In this case the sale of marketing services.

However, today, most approaches are more scientific. They are based on measuring brain activity, and / or the activation of the autonomic nervous system, while the individual performs a task related to the stimulus to be studied. Some expensive techniques are used, such as the fMRI (functional magnetic resonance imaging) scanner that measures blood flow in the areas of the brain that require more glucose. Also, simpler ones, such as determining heart rate or blood pressure to measure physiological changes in the body.

How does the brain work in decision-making?

We anticipate that, speaking of decision making, which we will comment below, also applies to a broader concept: Neuroeconomics.

It is used to say that decisions are more emotional than rational. It is true. The most emotional areas of the brain are involved in all of them. The limbic part.

However, talking about the limbic zone as a whole is to oversimplify. It is important, at a minimum, to differentiate between the centers that are more dedicated to maximizing pleasure from those involved in minimizing pain.

Moreover, we cannot forget the prefrontal cortex that makes us differentially human and where the most executive parts of the brain reside.

So maybe 50% of decisions cannot be said to be strictly rational; but in many of them the prefrontal cortex intervenes. For instance, directing attention, evaluating options, comparing with internal references, avoiding risks, inhibiting behavior, etc.

Watch out! When we say 50% on average, we mean all the decisions that are made in the world. Obviously, each person is different. In some there will be more prevalence of some emotional systems than others and more or less of the prefrontal cortex.

Before starting a neuromarketing study, it is worth knowing and selecting the participants.

Neuromarketing studies are expensive. More expensive if brain scanning techniques are used. Not many individuals can participate. Not many people participate in a focus group for traditional marketing either.

And, if on the contrary, do they all work differently? Then, the confusion to reach conclusions can become very great.

That is reason why it is important to be able to get to know each participant. To do this, you must first understand the decision-making styles. The neuro tool makes it easy for us. Let’s see the 4 styles that we differentiate with NeuroQuotient®.

We start from the premise that human action and decisions are motivated by the attempt to satisfy, more unconsciously than consciously, one’s own needs.

We found two styles related to the BAS system (behavior approach system). They are decisions of approach to the motivating stimulus.

A1. The exploring brain. It is motivated by novelty and signals from the environment that are source of (possible) pleasure. Sometimes the exploration is ‘internal’, only with the imagination. It is related to the reward system.

The signal derived from the object of possible purchase (or associated with it) produces a dopamine shot that motivates the action. In some cases, the action and decision can become impulsive seeking immediate reward.

Conscious thinking, if there is one, is How good is this! In any case, the decision can be followed by some type of rational self-justification.

Sometimes the true result can be frustration. We let ourselves be carried away by a momentaneous excitement, and it turns out that what we bought was not worth it.

A2. The brain focused on results. Somehow, he wonders what benefit is this going to bring me? What am I going to win?

The purchase is more rational in the sense that it does not seek immediate satisfaction. There is a postponement of the reward, but do not forget about it. You are proactive in a sustained, persistent, not impulsive way.

It is also dopamine that chemically motivates the action; but with attention to a longer-term benefit over time.

Two more styles of containment: risk prevention and collaboration with others.

There are two other styles with a BIS (Behavior Inhibition system) trend. Decisions have a greater contention component.

I1. The careful brain. She does not seek the same type of reward – associated with pleasure or with the tangible result – as in the two previous cases. The driving motivation is the need to feel calm and relaxed in the face of the uncertainty of the future. The unconscious question is something like, does this help me to be prepared to manage and keep future events under control?

In the brain, the threat or fear system is involved in the flight side. What he wants is precisely to avoid having to flee. Have no problems. The amygdala and the neurotransmitter GABA are involved. The object of decision has to have almost the same effect as taking a bezodiazepine. A tranquilizer.

It is a far-sighted brain, on the alert for real or imagined threats. Neither explorer nor so impulsive like the A1.

I2. The collaborating brain. Who can this be useful to? Who am I going to help with this? are their questions. And decide ‘I like this for … this other person’.

Also seek tranquility in the face of uncertainty. But the one derived from being able to face difficulties as a team. Most likely, it also pursues some kind of recognition, more or less unconscious.

It has a lot to do with the need for affiliation with other people. Prioritizing those who have given her recognition and helped her feel loved.

The amygdala and GABA are also involved, but especially oxytocin. Oxytocin that provides tranquility by connecting with the intercalated GABA neurons of the amygdala.

All combinations are possible, although some are more likely than others. The neuro tool helps us to predict the style of each individual, including the level of physiological activation they may have.

Obviously, a person is rarely completely pure in style. The most common is that you have a combination of them. The mixture of the two BAS’s or the two BIS’s is more likely. The combination A1 and I2 is also quite frequent (who decides spontaneously, thinking of others).

The four styles are related to the four dimensions of the NeuroQuotient® model. The neuro tool is very useful for the selection of participants in neuromarketing studies and, why not, in traditional marketing.

A final note. Some neuromarketing studies measure the activation of the autonomic nervous system. Not all individuals have the same type of coping or the same intensity of response to a certain signal. With the neuro tool it can be predicted if a person is more or less sensitive to inducing signals.

How are memory and behavior related? by NeuroQuotient®