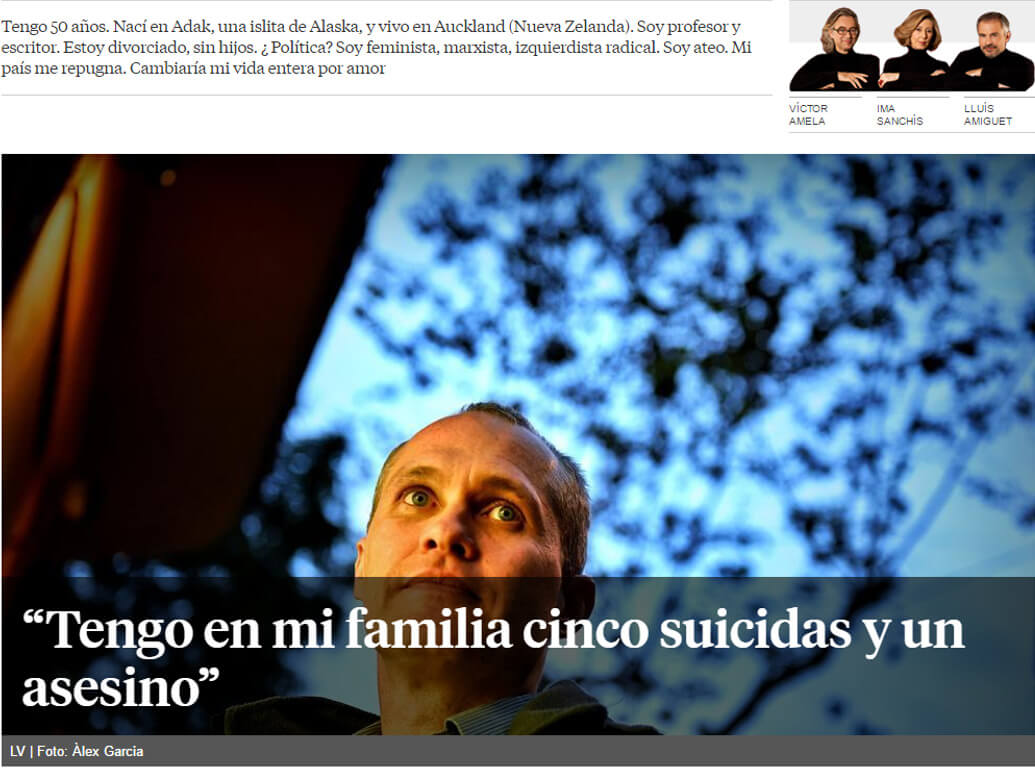 Guilt and suicide. Process and fundamentals in the brain

Our intuition did not fail when we thought that La Vanguardia’s contra could be a source of inspiration for NeuroQuotient® and explain the brain foundations of behavior. Today’s interview, 01/16/17 with David Vann – “I have five suicides and one murderer in my family.”, leads me to comment on the binomial guilt and suicide.

In this case, moreover, we will see a learning process so as not to fall into the limiting process: guilt and suicide. Ending in suicide, the most extreme human limitation.

We admit that the title of the article “I have five suicides and one murderer in my family” is shocking. However, what draws us to this writing is how David Vann explains the process of his father’s suicide and, later, his own apprenticeship.

The process of David Vann’s father.

Regarding his father, he says: “He judged himself very, very severely…. a perfectionist, he saw himself as a monster who acted badly. … He felt guilty… discouraged, hopeless, … he did not accept himself. … he shoot himself.

People with a tendency to perfectionism and high self-demanding, when some things do not evolve as expected, are likely to show a high sensitivity to criticism. From there there are two extreme options (and all the intermediate ones): those who blame others and those who blame themselves.

The process of self-blame carries with it a loop of negative thinking, of ‘rumination’, from which it is increasingly difficult to get out. From ‘I’ve done it wrong’, to ‘I’m not worthy at all’. No ability to change focus of attention, each time self-esteem decreases.

Step by step the ability to feel attraction to something decreases, and the energy is less. The person is in a process of depression, of inhibition.

And when discouragement and inhibition are very great, without the will to live….

The brain foundations of guilt and suicide

Let’s see, first, what happens to animals when they encounter a threat that is beyond them

When an animal cannot face a threatening situation neither fighting nor flying, it still has a third automatic option: freezing, to get stuck.

Most likely, the same brain substrates involved in ‘Freeze’ in animals are the ones that are activated in humans in the processes of total inhibition and depression

By the way, the primary neurotransmitter in inhibition is the wonderful (or not so?) Serotonin, which plays a role opposite to that of dopamine. The latter is key to the motivation of approach, the desire. But let’s leave serotonin, and its contradictions, for another post.

In addition, during rumination, negative thought loops are supported by the so-called ‘default network’, which is more active when there is a tendency to depression. At the other extreme is the ‘task network’, active when we perform a task.

And the human who cannot get out of the negative thought loop, who has neither the desire nor the energy to move forward, may decide to completely inhibit himself and… shoot himself.

The apprenticeship of David Vann

Accept that we can make mistakes. Avoid self-blame and know how to forgive ourselves.

‘Today I know that we all fail, all of us! I’ve learned?

‘Don’t judge me so harshly! To forgive me’

A whole strategy to get out of the process of guilt and suicide.

For another moment, it remains to wonder how genetics influences brain processes. Five suicides in the family, that’s a lot!

And the role of religion, as Vann points out.