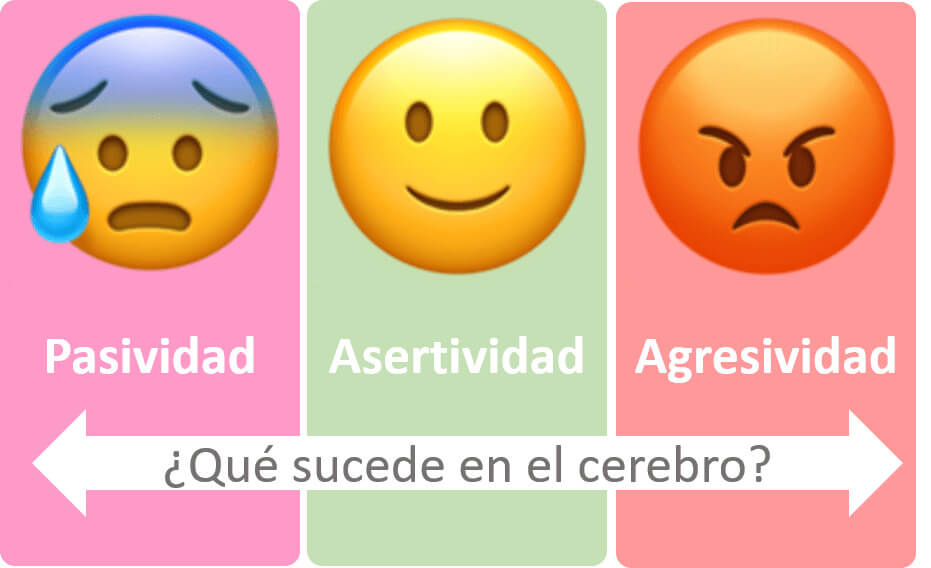 How can we be more assertive with neuroscience? Assertiveness is in average point between aggressiveness and passivity. The brain’s threat (or fear) System when mismanaged causes us to distance from this balance point. We will see, however, that we have resources in our brain that help us to be more assertive.

We will start with the concept of assertiveness. Then we will approach it from the point of view of the neuroscience. What happens in the brain that hinders us to be assertive? How can we take advantage of the fundamentals of neuroscience that we learn with NeuroQuotient to be more assertive?

We will start by defining what we mean by assertiveness. Based in the  Wikipedia:

‘Assertiveness consists in knowing our own rights and defending them, while respecting other’s ones … As a strategy and style of communication, assertiveness is situated in an intermediate point between two polar behaviours: passivity, which consists of allowing third parties to decide for us, or ignore our rights; and … aggressivity, which occurs when we are not able to be objective and respect the other’s ideas and rights ‘

We conceive assertiveness as an intermediate point between aggressiveness and passivity.

It is important to take this into account, because in some places and meanings the assertive person is defined as closest to acting with dominance and / or aggression. ‘Given to make assertions or bold demands; dogmatic or aggressive ‘. But, actually, with aggressive behaviours there is also a great opportunity to be more assertive.

But, what happens in the brain when assertiveness is low? When we are far from the middle point between aggressiveness and passivity and we can be more assertive.

Animals’ brain response to the threats to its survival.

To understand it more easily we will start by seeing what happens in the animals’ brains.

In face of a threat cue, in the animal brain the amygdala and stress are set in motion, to fight, flee or go unnoticed.

We have already seen that animals pick up signals from the environment with their senses, and their species memory guides their response to these signals. The answer depends on the limbic brain system that the conjunction signal / memory starts.

One of these brain systems is that of threat or fear. The one that responds to the signals that the memory considers threatening for survival. Remember that there are three types of response types: fight, flight or freeze.

If the animal, according its memory, can face the threat, then ‘fights’. If not, runs away. If the threat is very large, so that when fleeing would only become more evident to its predator, then it remains still, paralyzed, blocked. It is the response of a rabbit before the headlights of a car. In this case is mal-adaptive response. It may be useful to be unnoticed in front of a hawk, but it is very likely that the car runs over it.

Within the brain, the signal and memory (hippocampus) activate the amygdala (the limbic center of threat or fear). The amygdala triggers norepinephrine in the brain and adrenaline in the body. That is, the fast path of stress, which serves both to fight and to flee.

And in the human brain, what happens to us?

Well, we also have the threats or fear system. In our case, but, it not only starts with the signals of the environment. But we can also start it with thought, with the imagination and remembering (beyond the memory of the specie).

When we are not assertive we expel stress out aggressively or retain it inside and show passivity.

Let’s see it. Imagine a social situation in which we want our rights, our needs, to be respected. Situation, but in what, it worth for us to be more assertive.

If we tend to a fight response, with external signals – amplified by the internal ones (imagined or unconsciously remembered) – the amygdala will start up and, then, the stress to ‘fight’. But, as it is unusual for us to end up with ‘blows’, then we release the stress with anger and aggression. Screaming. And the others perceive us as aggressive and arrogant. Not assertive, and we lose their confidence, they don’t trust us.

But we can be more prone to the flight response. Then, with the external and internal signals, the amygdala is also started and, then, the stress. In this case to ‘flee’. But, it is not very normal for us to run away in a social situation that we perceive as a threat (in any case, we avoid it at the beginning or we want it to end as soon as possible). So, the stress energy remains inside our body. We feel nervous, unable to think and mentally blocked. We do not know what to say. We shut up and do not defend our needs. We are not assertive. We show passivity. We manifest little confidence in ourselves.

The NeuroQuotient tool helps us see how we connect, normally, unconsciously, with this type of behavior.

How can we be more assertive? How can we get away from aggression or passivity?

First of all, it will be a matter of trying not to excite the amygdala unnecessarily!

In addition, we have already commented that between the part of the amygdala that receives the signal and the one that starts the stress, there are the CIT neurons. GABA interspersed cells.

GABA is the main modulator neurotransmitter. We can activate these neurons with our thoughts. With the CPF (prefrontal cortex), resignifying, reframing. Connecting with other memories that do not imply threat, but security (tranquility and / or self-confidence).

With our thinking we can calm or “pre-calm” the amygdala!

Another strategy for the aggressive pole in which it is important to be more assertive: Empathy.

There is another way to activate the GABA neurons and calm down the amygdala: Oxytocin.

People with higher levels of oxytocin are more prone to trust and collaborate. In a famous study by Michael Konsfeld we can see that oxytocin (exogenous) favors trust and cooperation. The reason is that oxytocin, through activating GABA CIT neurons, calms the amygdala and produce tranquility and well-being.

Cooperation, trust, collaboration implies paying attention to the needs of others. Empathizing with them.

Finally, once we are able to manage the threat or fear system, and to calm the amygdala, it will be necessary to develop a communication strategy: How to express our needs to be more assertive.

But, we can find more information about it in books, courses and blogs on the net.

Guilt and suicide. Process and fundamentals in the brain (La Contra, La Vanguardia 2)